Watching the Earth Breathe from the International Space Station 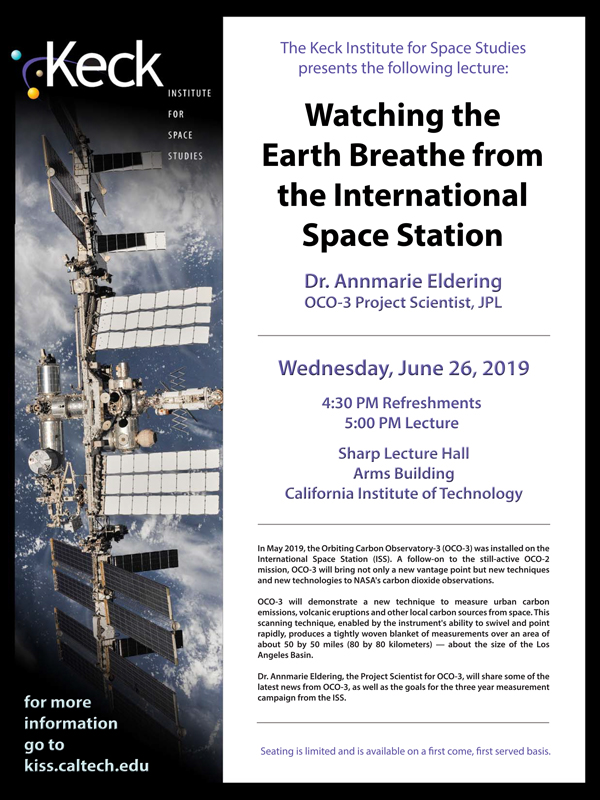 In May 2019, the Orbiting Carbon Observatory-3 (OCO-3) was installed on the International Space Station (ISS). A follow-on to the still-active OCO-2 mission, OCO-3 will bring not only a new vantage point but new techniques and new technologies to NASA's carbon dioxide observations. OCO-3 is a 3-band grating spectrometer, and can make extremely precise measurements of atmospheric carbon dioxide, sensing changes of less than 1ppm (relative to today’s concentrations that are about 400ppm). The space station circles Earth from 52 degrees north to 52 degrees south latitudes — about the latitudes of London and Patagonia. The vast majority of Earth's cities and agricultural lands, responsible for most of our planet's carbon absorption and emissions, fall within this zone. Where OCO-2's polar orbit takes it over each location at exactly the same time of day, the space station's orbit will put OCO-3 over each location at a slightly different time on every orbit. OCO-3 will demonstrate a new technique to measure urban carbon emissions, volcanic eruptions and other local carbon sources from space. This scanning technique, enabled by the instrument's ability to swivel and point rapidly, produces a tightly woven blanket of measurements over an area of about 50 by 50 miles (80 by 80 kilometers) — about the size of the Los Angeles Basin.

Dr. Annmarie Eldering, the Project Scientist for OCO-3, will share some of the latest news from OCO-3, as well as the goals for the three year measurement campaign from the ISS.

Dr. Annmarie Eldering received her Ph.D. in Environmental Engineering Science from Caltech in 1994 with a focus on air pollution and its impacts on visibility in Los Angeles. She has been at JPL since 1999, adapting her knowledge of radiative transfer and light scattering to algorithm development for the Tropospheric Emission Spectrometer (TES) as well as validation of AIRS data. After a period in technical management at JPL, she joined the OCO–2 project in 2010 in the role of Deputy Project Scientist. She is now also the Project Scientist for OCO-3, a follow-on payload that was installed on the International Space Station in May 2019.