This lecture is sponsored by The Planetary Society and the W. M. Keck Institute for Space Studies 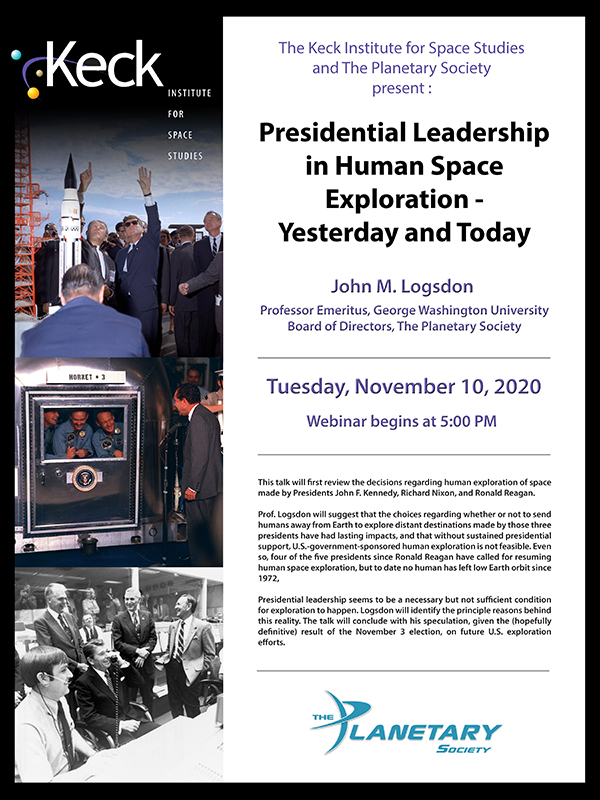 This talk will first review the decisions regarding human exploration of space made by Presidents John F. Kennedy, Richard Nixon, and Ronald Reagan. This portion of the talk will be based on my three books tracing those decisions. I will suggest that the choices regarding whether or not to send humans away from Earth to explore distant destinations made by those three presidents have had lasting impacts, and that without sustained presidential support, U.S.-government-sponsored human exploration is not feasible. Even so, four of the five presidents since Ronald Reagan have called for resuming human space exploration, but to date no human has left low Earth orbit since 1972, Presidential leadership seems to be a necessary but not sufficient condition for exploration to happen. I will try to identify the principle reasons behind this reality. The talk will conclude with my speculation, given the (hopefully definitive) result of the November 3 election, on future U.S. exploration efforts.

Dr. Logsdon is Professor Emeritus of Political Science and International Affairs at George Washington University’s Elliott School of International Affairs. Prior to his leaving active faculty status in June 2008, he was on the faculty of the George Washington University for 38 years; before that he taught at the Catholic University of America for four years. He was the founder in 1987 and long-time Director of GW’s Space Policy Institute. He was also a faculty member of the International Space University from 1988-2020. He holds a B.S. in Physics from Xavier University (1960) and a Ph.D. in Political Science from New York University (1970).

Dr. Logsdon’s research interests focus on the policy and historical aspects of U.S. and international space activities. His 2010  book, John F. Kennedy and the Race to the Moon,  was named the 2011 winner of the Gardner Lasser Aerospace History Award of the American Institute of Aeronautics and Astronautics and co-winner of Eugene M. Emme Astronautical Literature Award of the American Astronautical Society. His 2015 book, After Apollo? Richard Nixon and the American Space Program, was selected as the 2017 recipient of the AIAA Gardner-Lasser award. His 2019 account of civilian space decisions during the Reagan administration, titled Ronald Reagan and the Space Frontier, won the AAS Emme Award in 2020. He is the editor of the 2018 Penguin Classics compilation The Penguin History of Outer Space Exploration: NASA and the Incredible Story of Human Space Exploration. Dr. Logsdon is also general editor of the seven-volume series Exploring the Unknown: Selected Documents in the History of the U.S. Civil Space Program (1995-2008). He has written numerous articles and reports on space policy and history. He is frequently consulted by the electronic and print media for his views on space issues and has appeared as an expert on all major television networks and public radio.