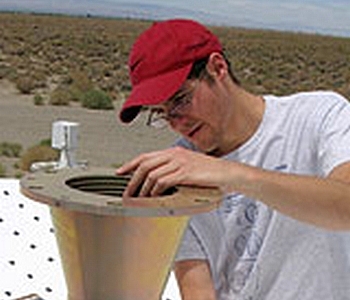 The second theme to my research has been studying relativistic jets in blazars. The relativistic jets which are thought to power blazars are a fascinating astrophysical mystery: in spite of five decades of intensive study we still do not know how relativistic jets are accelerated and collimated, nor what their composition is. We have entered a new era in the study of blazar jets with the launch of the Fermi gamma-ray space telescope. It is now possible, for the first time, to monitor the gamma-ray flux of a large number of blazars; this has sparked the advent of very powerful multi-wavelength flux monitoring campaigns from radio through to gamma-ray wavelengths. I built a radio polarimeter called KuPol for the 40m telescope at OVRO to monitor the linear polarization of over 1000 blazars, and lead an effort called RoboPol to build and use a polarimeter for a similar survey at optical wavelengths.

I am currently a Senior Scientist in the Astronomy department at Caltech. I am continuing my research in blazar jet emission using KuPol and RoboPol, and with the scientific analysis of the C-BASS data." (March 2012)