Craig Underwood (University of Surrey in the United Kingdom)

The overall goal of this three-year technical development program started in December 2009 is to create and demonstrate the technology fundamental to the development of a 100 m class coherent aperture that is both segmented and sparse.

A comprehensive study of current and future technologies for large telescopes was carried out during the study on Large Space Apertures and a key conclusion was that deployable primary mirrors will be too complex to build and test on the ground and hence prohibitively expensive at this large scale. The number of potential failure points will also increase with the number of component parts; this is a fundamental limitation of any telescope architecture that relies on a single structure for the mirror. An alternative approach already extensively investigated at JPL and elsewhere is a formation of separate satellites, each carrying a mirror segment, maintaining precision alignment while the telescope is in observation mode.

The approach that we are developing in this program is based on the concept of in-space self-assembly of a mosaic mirror from separate segments. Each segment is attached to a low-cost small satellite able to execute autonomous rendezvous and docking maneuvers. The satellites are launched in groups and form a monolithic cluster centered around a craft that carries the secondary mirror and the focal plane sensors. The mirror segments are made by replication on a single mandrel to reduce cost, are very thin to allow their shape to be changed, and are bonded to an active layer that controls the surface figure. A set of additional actuators at the interface between the satellite and the mirror controls the tip-tilt-piston modes.

We have identified four research themes that are central to this concept: (i) architecture of a telescope with a primary aperture formed by separate mirror segments, and shape control of the mirror segments; (ii) lightweight, thermally stable, active mirrors that can be made at low cost and are able to maintain figure accuracy without thermal protection; (iii) optimal guidance, navigation, and control algorithms to enable individual satellites to autonomously reach their operational configuration and dock to a central cluster; (iv) validation of the performance of a distributed telescope using ground measurements on mirror segments combined with computer simulation. Each theme is being studied by a JPL/Caltech research team; the team members are listed below.

A demonstration of this new concept is being developed in collaboration with the University of Surrey (UK). We plan to develop and launch a working telescope formed by 7 separate mirrors mounted on cube-sat class nanosatellites. An extensive mission concept study was carried out this year by the Aerospace Engineering class at Caltech, with support from a JPL project manager and mission design specialists.

A reader-friendly project description is available via this article.

During the last year all components of this project have advanced significantly and we have started to pull together our four research themes by focusing on two experiments:

We have formulated, in collaboration with the Aerospace Engineering class, the JPL instructors for the class, and the University of Surrey (UK) a technology demonstration mission based on the main themes of our research. The Autonomous Assembly of a Reconfigurable Space Telescope (AAReST) mission comprises 7 nanosatellites able to execute autonomous docking and reconfiguration maneuvers, each carrying a deformable mirror. In two different configurations of the telescope all mirrors will be adjusted to form a single coherent aperture and images of bright stars will be obtained. During the coming years we will develop the mirror payload for this mission and the University of Surrey will develop the nanosatellite bus. Our current target is to be ready for launch in 2015.

(i) Telescope architecture and deformable mirrors.

We have proposed a novel deformable mirror concept and demonstrated by numerical simulation that a Cassegrain telescope with a 10 m aperture with a focal length of 10 m can be made from 1 m diameter segments with identical initial shapes. We are working on a 1/10 scale demonstration of this concept by initially constructing in the Kavli Nanoscience Institute a 10 cm diameter deformable mirror made of several layers of plastic and over 200 independent actuation channels, Figure 1. We have developed algorithms for wavefront correction of a single mirror which will be tested on this hardware. 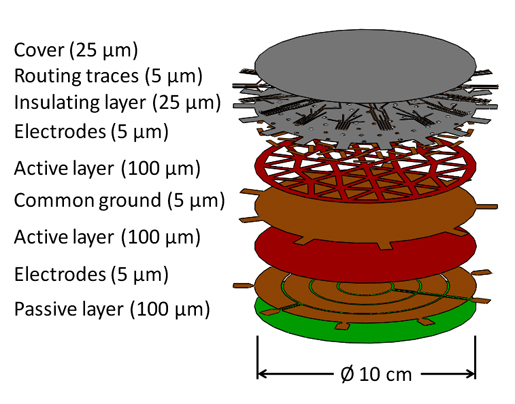 We are developing thermally and mechanically stable thin film mirrors which can be placed on the same type of actuating layers developed in (i). These thermally stable films are based on a tessellation of Al and Ti regions with specific geometries that allow us to tailor the coefficient of thermal expansion of the lattice. We have developed a technique for separating the mirror from the Si substrate on which it is initially formed by a process involving vapor deposition and deep reactive ion etching, Figure 2. We have studied the mechanical properties of the constituent materials of the mirror (Al and Ti) by means of nanoindentation experiments. We measured a Young’s modulus higher than what is reported in literature of bulk Al and Ti and are currently working on explaining this result. We have developed computer models that predict the response of a thin film mirror to actuation and other loading schemes using finite element simulations.

We have set up a simulation model for a seven-spacecraft system using rigid body and propulsion models of available hardware. We have used this model to derive and verify an optimal control strategy for reconfiguration. We have developed strategies for electromagnetic docking and verified the feasibility of magnetic-only docking within half a meter separation, based on electromagnetic rods arranged near the four corners of a face of the docking spacecraft, Figure 3. 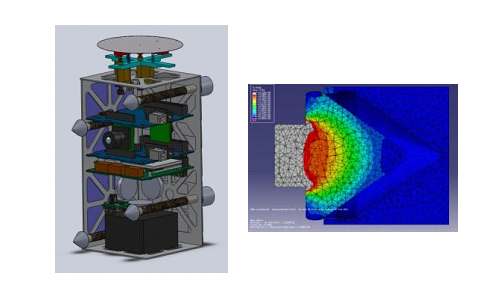 We have constructed a laboratory testbed using a frictionless air table and overhead visual telemetry system; it includes a propulsion base for validating the control laws and for simulating orbital disturbances, Figure 4. 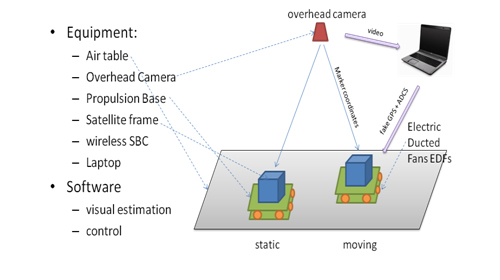 We are currently developing an inter-spacecraft machine vision system for relative telemetry and integrating the visual processing, control, and docking algorithms with hardware that will be provided by the University of Surrey.

(iv) Simulation of in-space assembly and overall performance of mirror.

We are studying the dynamics of docking, latching, and assembly of multiple small satellites into a single aperture. To this end, we have developed a toolkit that allows us to robustly and efficiently model non-smooth, non-convex , and multiple contact situations in stiff systems. This includes a novel collision detection algorithm that can be stated as a linear program for non-smooth bodies, and hence can model collisions between satellites with complex shapes. We have successfully adapted an explicit simplectic (energy and momentum conserving) integrator to treat systems of rigid bodies with collisions. We have also implemented the new collision detection as a contact potential in several finite element models to test its robustness and ability to model latching between two spacecraft. We are in the beginning stages of applying uncertainty quantification (UQ) to certify latching systems and control algorithms.