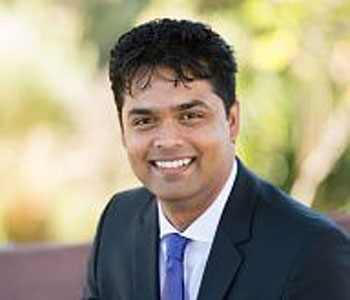 Where is he NOW? - Radar Engineer, JPL

"Multi-temporal InSAR (MT-InSAR) techniques are unique in their capability of simultaneously estimating the temporal and spatial characteristics of surface deformation over a large area of interest with sub-centimeter accuracy. I'm interested in understanding the effects of wavelength, resolution and orbit repeat periods on MT-InSAR accuracy and performance. I'm also interested in the development of multi-dimensional phase unwrapping algorithms that can incorporate other geodetic deformation measurements, like GPS, to constrain MT-InSAR deformation estimates." (April 2010)

Agram has been working on analyzing the recent Japanese Earthquake using InSAR data. Some of the results are being widely circulated, including on the European Space Agency website. (April 2011)

Time evolution of the surface displacement at Long Valley Caldera, California as observed using the European Space Agency satellites - ERS and ENVISAT. 85 radar images from UNAVCO's SAR archive were used to produce 263 interferograms using the ROI_PAC software from JPL. The final deformation estimates were derived from the interferograms using the GIAnT toolbox developed at Caltech. GIAnT, whose development was partially funded by KISS, is a software framework for estimating the time history of surface deformation with sub-centimeter accuracy from a set of radar interferometric observations. (February 2013)

GIAnt is mentioned in the article "New Radar Interferometric TimeSeries Analysis Toolbox Released" which has been published by EOS.

On October 10, 2017, Dr. Agram was selected as a recipient of the prestigious Lew Allen Award for his major contributions to InSAR-based geodetic imaging and geophysical time series analysis.