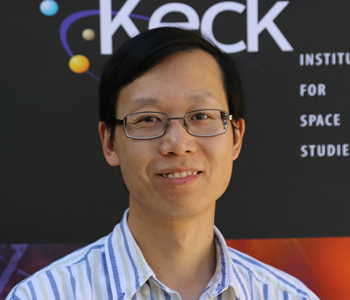 Where is he NOW? - Research Engineer, Stanford University

Watch a video with Mylar model of a slip wrap packaging concept being deployed. This novel technique allows for packaging membranes tightly and efficiently.

"I propose to explore technological concepts that will enable small spacecraft to complement larger conventional spacecraft in forecasting and awareness of space weather effects. Unlike large spacecraft that are primarily influenced by gravity, small spacecraft are more strongly influenced by solar radiation pressure, Lorentz forces, and other factors that are typically treated as disturbances. As a result, they can fly unique trajectories and probe regions of space that are inaccessible to conventional spacecraft. Concepts for miniaturized space weather sensors will be assessed both from the scientific perspective of maximizing the useful data gathered and from the engineering perspective of fabrication and operation of the spacecraft. The focus of this research will be the determination of performance scaling with spacecraft size, identification of stable orbital configurations using external forces from the space environment, and maximizing the scientific return of a sensor swarm through orbit selection. The work proposed here will enable mission concepts to provide increased capabilities both in space weather monitoring to support spacecraft operations and for scientific research into the physical processes underlying the evolution of space weather conditions." (2013)